More on Interest Rates and Inflation

In my previous post, I argued that New Keynesians do not understand monetary policy. The New Keynesian model predicts that if one pegs the interest rate, then increases in the interest rate cause increases in the rate of inflation. New Keynesians, however, argue that in order to stimulate economic activity and increase inflation, the central bank needs to reduce nominal interest rates. Thus, I argued that either their policy advice is wrong and their model is correct or their model is correct and their policy advice is wrong.

New Keynesians, however, seem to believe that they have solved this problem with the Taylor principle, which states that when inflation rises by 1%, the central bank should increase the nominal interest rate by more than 1%. The intuition behind this is that by raising the nominal interest rate by more than the rate of inflation, the central bank is increasing the real interest rate, which reduces demand and thereby inflationary pressures. Using the Taylor principle, New Keynesians were able to show that they could get a unique equilibrium using an interest rate target. In addition, their model showed that they could do this all without money.

Despite the ability of New Keynesians to get a unique equilibrium with an interest rate target and no reference to money, remained critics of the practical application of the model. A number of critics, for example, pointed out that the way in which the Federal Reserve adjusts its own interest rate target, the federal funds rate, is through open market operations. The Federal Reserve increases the supply of bank reserve by making open market purchases and this causes the federal funds rate to fall. Thus, the critics argued, that even when the Fed uses the federal funds rate as its preferred measure of communicating policy, the Fed’s actual policy instrument is the monetary base.

The New Keynesians, however, countered that they didn’t need to use open market operations to target the interest rate. For example, Michael Woodford spends a considerable part of the introduction to his textbook on monetary economics to explaining the channel system for interest rates. If the central bank sets a discount rate for borrowing and promises to have a perfectly elastic supply at that rate and if they promise to pay a rate of interest on deposits, then by choosing a narrow enough channel, they can set their policy rate in this channel. In addition, all they need to do to adjust their policy rate is to adjust the discount rate and the interest rate paid on reserves. The policy rate will then rise or fall in conjunction with the changes in these rates. Thus, the New Keynesians argued that they didn’t need to worry about money in theory or in practice because they could set their policy rate without money and their model showed that they could get a determinate equilibrium by applying the Taylor principle.

The standard story about the impact of monetary policy on nominal interest rates as follows. Suppose that the central bank increases the growth rate of money. Assuming that we are initially in equilibrium, this increase in the growth rate of money initially increases the nominal supply of money such that the real value of money balances is greater than individuals desire to hold. As a result, the nominal interest rate must fall to induce individuals to hold these higher money balances. This decline in the interest rate is referred to as the liquidity effect. Over time, however, this increase in money growth causes inflation to increase. Thus, as inflation expectations rise, this puts upward pressure on the nominal interest rate. This is referred to as the Fisher effect.

This distinction is eminently important when one considers the implications of paying interest on reserves. For example, consider the world without interest on reserves. The standard story about the market for reserves is that the Federal Reserve determines the supply of reserves and therefore the supply curve for reserves is vertical. The demand for bank reserves is decreasing in the nominal interest rate. Thus, an increase in the quantity of bank reserves shifts the supply curve to the right. At the old interest rate, banks want to hold less reserves than are supplied. Thus, the interest rate has to adjust downward to get us back to equilibrium. This is shown in the figure below. 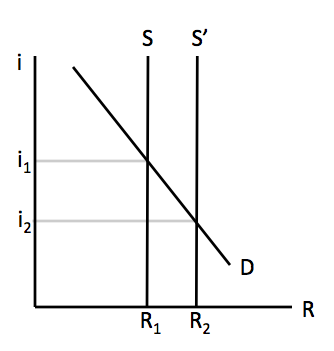 Now consider the effects of this change within the following basic framework. Recall that the equation of exchange can be expressed in logarithms as

where m is a broad measure of the money supply, v is velocity, p is the price level, and y is real income. The equation of exchange is identically true. However, we can use the equation of exchange to discuss the implications of the quantity theory of money if we have some theory of velocity. Suppose that we adopt the standard Keynesian liquidity preference view of money demand:

Thus, the demand for real money balances is increasing in real income and decreasing in the nominal rate of interest. Assume for a moment that

. It is straightforward to show that we can solve this expression for the demand for money to get a theory of velocity:

Thus, velocity is an increasing function of the nominal interest rate. Substituting this into the equation of exchange, we have: 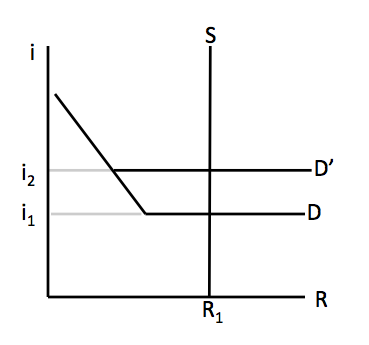 [Updated: Scott Sumner made clear to me in the comments that what initially followed this point was hard to understand. As a result, it has been edited to be more clear. –JH]

. Then, returning to our equation of exchange we have:

Now consider what happens if the central bank increases the interest rate paid on reserves, holding the money supply constant. According to the expression above nominal spending increases when the interest rate rises. To understand why, consider that the interest rate on excess reserves reduces the demand for currency. Since the supply of currency doesn’t change, individuals increase spending to alleviate attempt to alleviate this excess supply. However, the excess supply is alleviated only once prices have risen such that real currency balances are back in equilibrium. It is important to note that this increase in velocity results only because individuals are pushed off of their demand curve (i.e. the individual is temporarily off of their currency demand curve). This disequilibrium is a characteristic of most supply and demand analyses. The supply and demand for reserves, however, is given by a cross. There is never a point of disequilibrium. As a result, the velocity of reserves is unchanged.

Note here that this result comes entirely from adopting New Keynesian-type assumptions in a static model. There is no role for expectations and I haven’t done any fancy tricks with difference equations.

Second, the typical New Keynesian liquidity preference view of money demand is wrong (this is by the way, the New Keynesian view, you can find it in Gali’s book on the NK model). The money demand equation should be a function of the price of money, not “the” nominal interest rate (see my recent post on the price of money here). This is important because the implications of paying a higher rate of interest on reserves for the opportunity cost of holding broad measures of money is not obvious.

Taking these points slightly more seriously, we could re-write the equation of exchange as

is the money multiplier,

is the price of money, and

whereas the latter would reduce

. Thus, the effect on inflation would depend on the relative magnitude of this effect. If the effects were of equal magnitude in absolute value, then the inflation rate wouldn’t change. This is precisely the outcome shown in Peter Ireland’s model of interest on reserves which appends the standard NK model to have a role for broad money:

The term neo-Fisherites has arisen to describe people like John Cochrane, who has suggested what New Keynesians believe to be a particularly weird policy conclusion. Namely, he has suggested that the Federal Reserve’s pegging of the interest rate on reserves at a rate very close to zero implies that we will experience deflation. A number of people I would identify as New Keynesians have privately communicated to me that they think this claim is preposterous and that Cochrane doesn’t understand how policy works. However, I would submit that John Cochrane understands the New Keynesian Model better than the New Keynesians and that if his prediction is wrong, then this has more to do with how little New Keynesian models teach us about monetary policy.

New Keynesians seem willing to admit the above policy is unsustainable. However, they think that it works in the opposite direction. In particular, New Keynesians have countered that if the Federal Reserve pegs the interest rate too long, then we should get more inflation and not less. This is certainly in keeping with the argument of Milton Friedman in his 1968 AEA Presidential Address. As Peter Howitt (2005) explains:

Friedman argued that at any given time there is a hypothetical (“natural”) real rate of interest that would generate a full employment level of demand. If the central bank set nominal interest rates too low, given the expected rate of inflation, then the real interest rate would be below this hypothetical natural rate, and this would generate excess aggregate demand, which would cause inflation to rise faster than expected… With inflation running faster than expected, people’s expectations of inflation would at some point start to rise, and if the nominal rate of interest were kept fixed that would just fuel the fire even more by reducing the real rate of interest still further below its natural rate.

I could have easily summarized Friedman’s position myself. However, the quote of Peter Howitt describing Friedman’s position is purposeful. The reason is because a number of observers have claimed that Cochrane and other neo-Fisherites should just read Howitt’s 1992 paper that seemingly shows how the New Keynesian model produces Friedman’s prediction. However, I would submit that this fails to understand Howitt’s paper.

For the interested reader, let me condense Howitt’s paper into a simplified New Keynesian framework. Suppose that there is an IS equation:

and a New Keynesian Phillips Curve:

is the output gap,

is the nominal interest rate,

is the natural real rate of interest,

is the expectations operator, and

. In a rational expectations equilibrium, it will be true that

. Using this result, we can now combine the two equations to get an equilibrium inflation rate. Doing so yields,

Thus, in this New Keynesian model, when the central bank pegs the interest rate, the equilibrium inflation rate is increasing in the nominal interest rate. This is precisely what Cochrane and others have argued!

New Keynesians, however, conveniently ignore this result.* Instead, they immediately jump to a different conclusion drawn by Howitt. In particular, the way in which Howitt argues that we can obtain Friedman’s result in this framework is by starting with a departure from rational expectations. He then shows that without rational expectations, individuals would make forecast errors and that this particular policy would reinforce the forecast errors thereby producing Friedman’s conclusion. Any learning rule would push us away from the unique equilibrium

But the New Keynesian model doesn’t assume a departure from rational expectations. Thus, our result that

is not overturned by Howitt. Those who seek Howitt for support are abandoning the New Keynesian model.

causing a multiplicity of equilibria even under the assumption of rational expectations. Thus, the equilibrium I describe above might not be unique in more general models in which the expectation of the output gap appear in the IS equation. New Keynesians have argued that you can generate a unique equilibrium by having the central bank increase the interest rate adjust more than one-for-one with changes in the inflation rate. However, Benhabib, et al. have shown that this isn’t sufficient for global uniqueness and that there is a multiplicity of stable equilibria near the zero lower bound on interest rates.